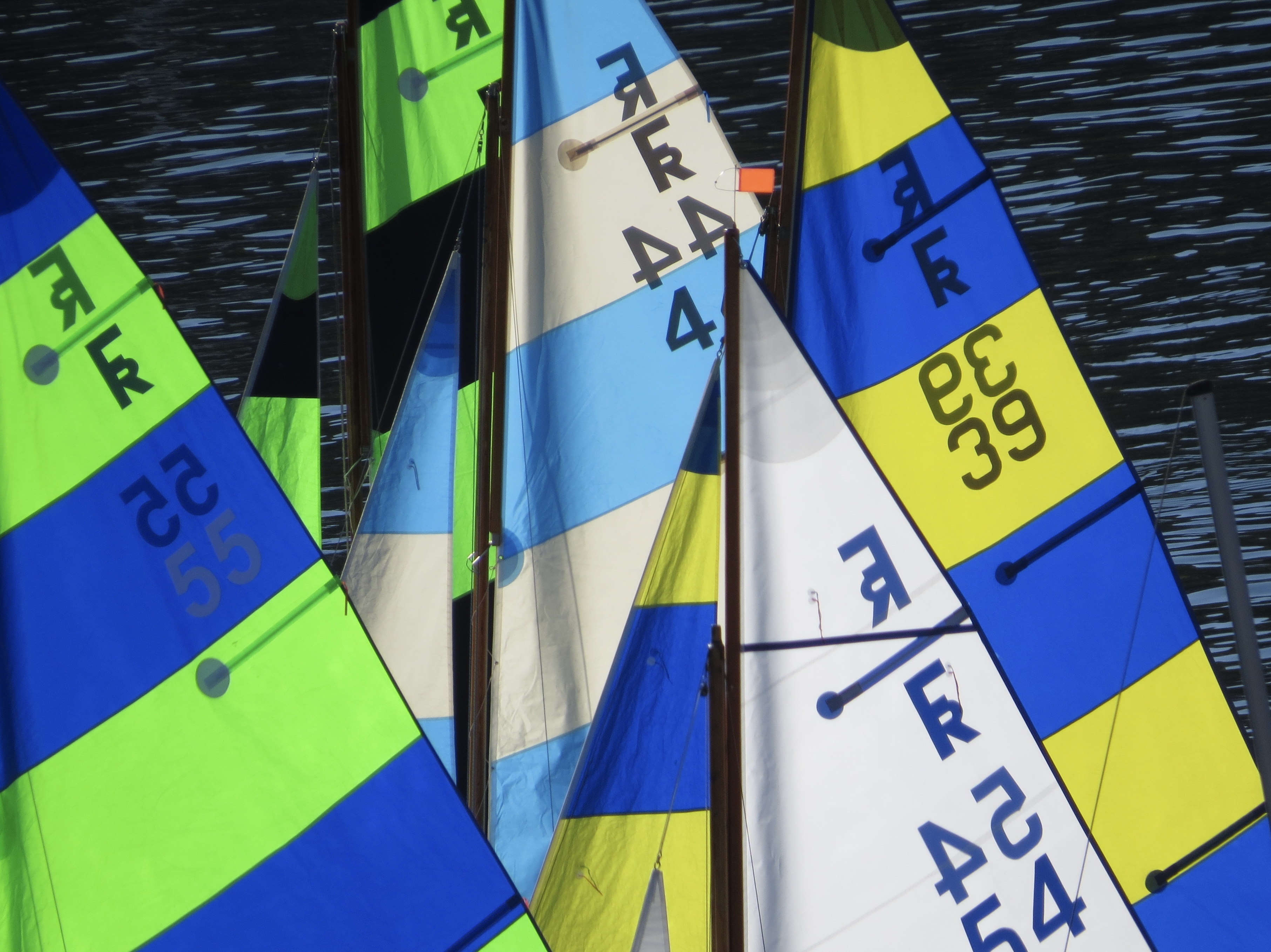 The Fowey River class dinghy is based on the Yachting World 15ft knockabout dinghy designed by Reg Freeman in the late 1930's. The plans were published in Yachting Monthly magazine in April 1939 to try and encourage people to build their own boats from plans that were available to purchase through the magazine. After the war the design was again publicised in Yachting Monthly in November 1945 issue.

The original plans included options for chine or clinker hull construction from timber. The rig was shown in three options gaff, Bermudan and gunter. The clinker hull with gunter rig has been adopted by the class since its inception in Fowey.

In the early 1950's, Hunkin's Boatyard at Polruan built one of these knockabout boats for the local dentist Mr Mogg, who named her Michelle after his daughter. More soon followed, with 15 boats in the fleet by 1957.

As well as Hunkin other local builders have also built Fowey Rivers. Percy Mitchell at Portmellon, Watty in Fowey and Toms in Polruan and by 1965 the fleet had reached 36 boats. As with a lot of local wooden fleets, the numbers then dwindled in the 1970's and 1980's as grp construction became that of choice for the majority with the fleet almost disappearing and just one Fowey River racing regularly along with a few 'old wrecks' turning out for Regatta.

However, there was an underlying interest in the boats; they could be used for racing, rowing, taking the family to the beach for a picnic, put a little outboard on the back and motor up the river on the evening tide to Golant or Lerryn: a truly multi-purpose little boat indeed a 'knockabout'!

In the early 1990's, one or two new boats were built. Some of the older boats underwent serious restoration work: the keel/garboard seam was a weak point, as was the fastening of the centreboard case. Over the last 20 years, a renewed interest has seen the fleet back out racing with nearly 30 new boats built and several "oldies" restored. Fowey Rivers, with their multi-coloured sails are an intrinsic part of Fowey Harbour.

Since hull number 52, launched in 2007, the majority of boats have been built by Marcus Lewis in his workshop at Windmill in Fowey with three being built by Peter Williams. The latest hull number is number 70 launched in 2019 and number 71 is currently under construction.

There is an active Class Association, which organises social and sailing activities and seeks to protect the spirit of this very special boat by involvement during the building of new boats to ensure they fit within the class measurement rules. A set of class rules governing the construction and specification of the hull, spars, sails and fittings are available here for those interested.

If you would like to share the enjoyment and pleasure that owning a Fowey River brings and would like to have a trial sail, please contact Andrew Dellow, the class captain who will assist in whichever way possible either introducing you to the boat builder or owners with boats for sale. Or if you are interested in crewing then also let Andrew and he can put you on the crew list.

The Class has an active racing and social programme with club racing taking place on Wednesday evenings and Saturday afternoons April to September and Friday evenings between June and August. The Wednesday and Saturday racing is split into separate series each of two months and with and a single Friday series. Special races to Golant and Polkerris are also run which end up in the pub at each of these two picture postcard waterside villages and make for a great day. Several cup races are held through the season and these also form part of the series. The highlights of the season are the class championships which take place over three days at the end of May attracting about 20 boats and of course Royal Fowey Regatta in August with 8 races over four days with up to 35 Fowey Rivers adding a spray of colour to the week and making up the biggest fleet of the event.

Racing is organised on behalf of Fowey Gallants Sailing Club and Royal Fowey Yacht Club by Port of Fowey Race Organising Committee (POFROC). They have their own dedicated web-site where all notice of race, sailing instructions, entry forms and calendar may be found. POFROC also host the race results on behalf of all class racing in Fowey.

Social events are organised through the year from post-race analysis over a pint in the club bars, regular suppers or BBQs and a Christmas jolly.
You can also follow us on Facebook at the "Fowey River Class Association" page.

Fowey Rivers that are around in Fowey are shown below, the others have disappeared but if anyone knows the whereabouts or fate of the 'missing numbers' please contact one of the above. There is a chart showing all the known boats in the club and this is useful to identify individual boats as they all have a unique colour plan for their sails. 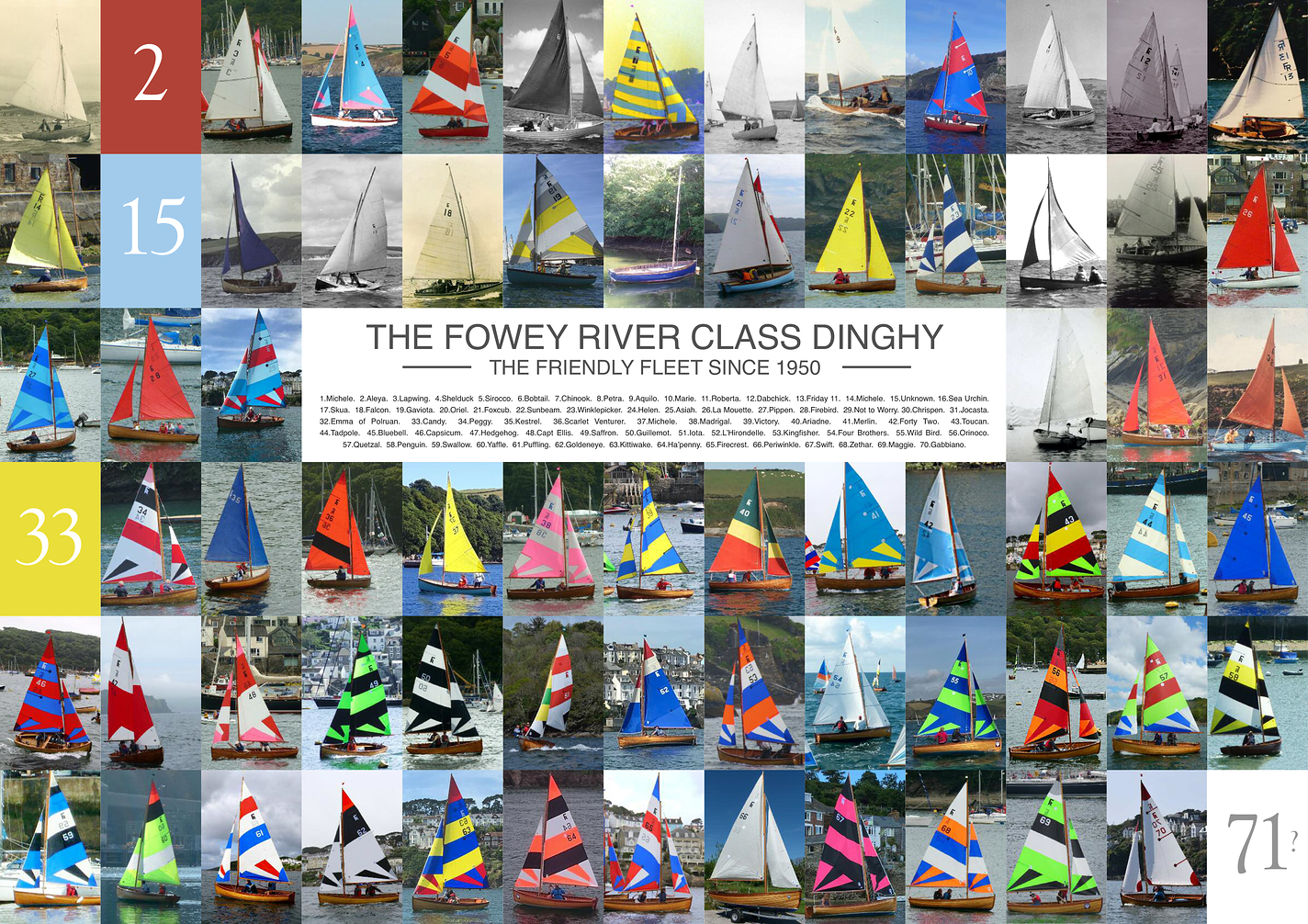