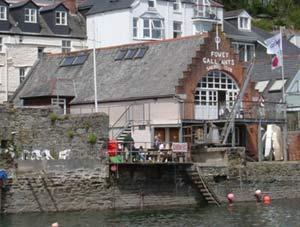 Established in 1947 by Wilfred Denaro, Fowey Gallants original aim was to encourage young boys and girls to sail. The early success was largely down to his philanthropy and drive. It proved very successful and many youngsters sailed with him on his yacht 'Gallant'.

However, in the early 1970's Denaro, in advancing years and for business reasons, left Fowey. This, along with other issues, prompted a rethink of the club. In September 1972 the Fowey Gallants Sailing Club was formed through a merger between the Fowey Gallants and Fowey Sailing Club. (Fowey Sailing Club had no premises at the time and met at the Ship public house). In these pioneering days things were very different to the club we know now. For instance, although liquor had been available at club functions, a bar was not fully established until 1973 and then it was run solely by volunteer members. Downstairs was still a boat store with a slipway to the river leased separately to the Quiller-Couch family. The lease for the whole of the premises and site as we know it today was assigned in June 1979. For many years boats were still built in the boat store during the winter including many Mirror dinghies built from kits for club members use.

In keeping with the original concept of Denaro the provision for children sailing remained high on the agenda, as it still does. There was a night for youngsters and sailing was continually encouraged with mirrors and other boats available for hire to members. The focus on the youngsters has continued to the junior section we now have, and this continues to be thanks to the hard work of volunteer members along with our sailing instructors.

Through the 1970's the club continued to grow and membership increased considerably. The new long term lease assigned in 1979 allowed the club to embark on some significant investment and expansion. Plans for the development of the club were made and several projects took place to improve the club.

During the 1980's and 90's larger projects were undertaken to provide us with the club we use now. The winter of 1985 saw the slipway filled in and the development of the downstairs to provide new toilet facilities and a newer kitchen, 1987 the bar was redeveloped and for the first time a club steward was employed to run the bar. Around a decade later in 1998 though was perhaps one of the biggest projects with the redevelopment of downstairs, both inside and out, to provide a new boat shed and storage area, a larger outside recreation area, increased toilet, shower and changing facilities, a new and a fully equipped kitchen. A downstairs bar was also provided but this has now gone to make way for the expanded dining and catering facilities.

This brings us to the club we have now, with a full annual sailing program, a thriving junior section and a well run and sociable club where members can come for a drink and enjoy the riverside views with their families, eat a fabulous range of food prepared by our chef or attend one of the many special events through the year. These events may be sailing focussed such as fitting out or laying up suppers or one of a number of special fun themed nights. The TV in the bar sees good use in the winter showing live Rugby matches most weekends.

For the sailors there is a full season of racing during the peak season from April to September which is the time that the local fleets of Fowey Rivers and Troys are seen most Saturday afternoons and Wednesday evenings. Post racing discussions in the bar can be quite lively after these! In the winter months from October to December and March-April FGSC also runs handicap dinghy racing from the club startline on the balcony on Sunday mornings.

Visiting yachtsmen are a regular feature in Fowey and the club welcomes the crews of such boats.

New members welcome so please contact the membership secretary (see below) if you have any queries or see the relevant section elsewhere on the web-site.